I don’t think that I’m inherently conservative, so it’s interesting that many songs I listen to are older.  I’m certainly not opposed to listening to new releases, and I do keep up to date with trending bands and the newest fads, but when it comes to songs that I play on repeat, they’re hits that have proven the test of time.  Maybe it’s because I grew up listenting to them on the radio, and the background noise ingrained on me; I’m not sure.  So here are five songs that I find myself gravitating towards time and time again.

“God Only Knows” by the Beach Boys

I’m not necessarily a huge Beach Boys fan, for I find their early stuff overly juvenile and simplistic.  But Beach Boys leader Brian Wilson made his masterpiece when he recorded Pet Sounds, which was released 1966.  Wilson had actually retired from touring over a year before going into the studio to record the album with many of Los Angeles’s leading sessions players, who were informally known as the Wrecking Crew.  Wilson effectively left his band mates out of the creative process and brought them into the studio only at the very end to record their vocal tracks.  (His fellow Beach Boys, understandably, were frustrated, and as a result disagreed with Wilson’s creative focus.)  Co‐writing with lyricist Tony Asher, Wilson produced a collection of introspective songs that had harmonies and structures that were unusually complex for pop music then or since.  The album had an immediate and powerful impact, going so far as to inspire the Beatles to record Sgt. Pepper’s Lonely Hearts Club Band.

Wilson effectively left his band mates out of the creative process and brought them into the studio only at the very end to record their vocal tracks.

And who can deny the power of an album that contains classics like “Wouldn’t It Be Nice,” “Sloop John B,” and the album’s title track.  But perhaps the album’s true classic is “God Only Knows,” which opened the album’s second side. A gentle, three‐minute tune that begins with french horns, viola, and cellos, instruments typically found in an orchestra, the song is a sweet love song in which the singer speaks about not wanting to be apart from the love of his life.  It has a consistent tempo throughout, but towards the end the song increases in volume, with more complex vocal harmonies and heavier instrumentation adding a melodic and symphonic element.  Yet the song has a simplistic and upbeat message, and as a result, the song has been featured in multiple movies, including Love Actually and Boogie Nights.  It was also the theme song for the TV show Big Love.

Nick Drake may not be a household name, and that’s a shame.  In his short life (he died aged 26 in 1974) Drake produced only three albums, all of which sold extremely poorly in his lifetime.  Indeed, it wasn’t until a decade after his death that well‐known musicians, including R.E.M.’s Peter Buck and The Cure’s Robert Smith, spoke of how influential Drake had been to their musical education.  And around the same time, The Dream Academy released their hit song, “Life in a Northern Town,” which was inspired by Drake and his tragic life.

Drake remains an enigma, for his music was simultaneously inspired by and hampered by his severe depression.  Drake lived his entire life with his parents, who towards the end were worried enough to hide pills from their son.  When Drake’s music label dropped him, causing him to lose his small weekly retainer, he was unable to buy a new pair of shoes.  Drake had a small network of friends, who all reported that Drake would sleep on their couches and then disappear for weeks at a time; and a week after Drake’s closest female friend ended their relationship (she couldn’t cope with his depression), Drake died from an overdose to anti‐depressants.

Indeed, it wasn’t until a decade after his death that well‐known musicians, including R.E.M’s Peter Buck and The Cure’s Robert Smith, spoke of how influential Drake had been to their musical education.

Yet this doesn’t explain why Drake’s music didn’t get wide attention until his song “Pink Moon” was featured in a Volkswagen internet commercial in 1999.  After all, other musicians achieved fame while experiencing illness and hardship.  Just look at Brian Wilson.

But thanks to that commercial, more people became aware of Drake’s music, which often relied on nothing more than voice, with guitar and piano (though his first two albums had some orchestral arrangements).  His beautiful melodies, augmented by his unusual guitar tuning and cluster chords, are quite hypnotic.  Take in point the song “Northern Sky,” a gorgeous melody with lyrics that equate love with images of nature.   “Would you love me for my money?/Would you love me for my head?/Would you love me through the winter?/Would you love me ’till I”m dead?” illicit a hope from nature. “I never felt crazy magic like this/I never saw moons knew the meaning of the sea/I never held emotion in the palm of my hand…”  I get the sense that Drake isn’t singing to a particular person but rather to the northern sky itself.  And his guitar and piano in the song sound like the wind.  Indeed, many of Drake’s songs are about his observation of nature, seemingly hinting that Drake was more attached to inanimate objects than to people.

“Song in My Head” by Martha and the Muffins

All artists have that one song that defines them: for Queen it’s “Bohemian Rhapsody,” for The Police it’s “Roxanne,” and Corey Hart it’s “Sunglasses at Night.”  And while they produced other amazing songs that I enjoy listening to, I dislike their biggest hit.  Maybe it’s because I’ve heard it one too many times.  And Martha and the Muffins is no exception.  This Canadian group, started in the late ’70s by art school graduates, hit it big in 1980 with their one international hit, “Echo Beach,” a song I’ve heard one too many times on Canadian radio stations (thank you Canadian content rules!)  But that doesn’t mean that the band didn’t have other songs that are thoroughly enjoyable, including “Black Stations/White Stations,” about the implicit racism in the recording industry at the time; “Cooling the Medium,” a wickedly fun song that was accompanied by a bizarre video that only art school graduates could have dreamed up; and “Song in My Head,” a great mid‐1980s pop song that actually has a cool video.  It’s an up‐tempo song, complete with a funky bass riff, a quiet guitar, and loud horns and synths playing throughout.  It’s ultimately about the singer breaking up with her romantic partner because, “You started to give me that old refrain/I never wanna hear that song again,” so realistically it shouldn’t be a fun song to listen to.  Yet it is fun precisely because the song is so self‐referential about being a song.  The chorus repeats the lines “There’s a song in my head going round and round/There’s a something in my heart that I never found.”  But for more fun, watch the song’s video, which is readily available on YouTube.  In it, group singer Martha Johnson is in a sound stage (wide shots reveal it to be a sound stage, with a working film crew) while a wardrobe crew dresses her and applies makeup to her face.  She’s standing on a rotating stage as different background scenery and people spin around her.  Get it?  As Johnson sings in the song, “There’s a song in my head going round and round.”

“Give a Little Bit” by Supertramp

Many would argue that Supertramp’s artistic triumph was their 1974 album, Crime of the Century, a collection of songs that share closely related themes of despair, isolation, and ennui, causing group writers Rodger Hodgson and Rick Davies to comment that the album was not a conscious attempt at writing a concept album.  It’s a thoroughly enjoyable album to listen to from beginning to end, but Supertramp’s true anthem came later in the decade with “Give a Little Bit,” a song that Hodgson wrote when he was about 19 but didn’t record with the group until after achieving success with Crime of a Century.  The song is pure pop, with Hodgson’s unique singing voice blending nicely with his 12‐string guitar.  The song is pure anthem, and yeah, it’s a love song, but it’s not necessarily about romantic love.  The song is more about the desire to connect with other people.  Hodgson could probably have retired on the earnings of this one song alone, for it’s been in countless commercials.  It’s in Amazon’s 2017 holiday commercial, and a few years ago Coca‐Cola used it in their brilliant ad, playing the song over video surveillance images of people doing acts of kindness.  It is a feel‐good song, and who doesn’t play air guitar to it? 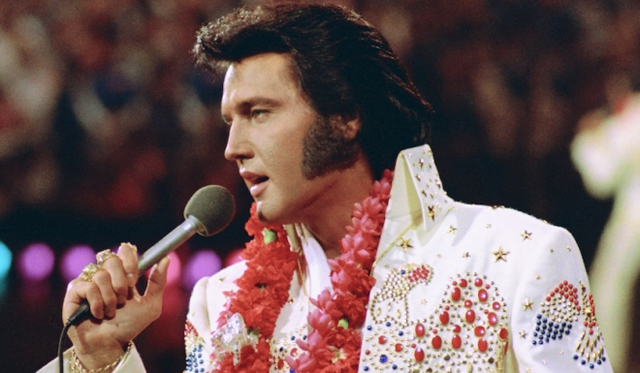 I’ve never been a huge Elvis fan.  I know that saying this is as blasphemous as saying the Beatles were overrated (they were, except for George), but Elvis was nothing more than a good‐looking face with a good voice.  He sang songs he didn’t write, barely played guitar, and stole his shaking‐hips routine from black rock ‘n’ roll singers who had spent the previous decade perfecting their acts.  But Elvis brought it into the mainstream, and for that he should be thanked.  But he paid a heavy price, for fame was horrible to him, forcing him to retreat in later years to his palace, where he turned into a bloated drug addict who died tragically young.  Yet it’s from Elvis’s later period‐‐1972 in fact‐‐that I find one of my latest song addictions, “Burning Love,” an amazing song written by Dennis Linde and first recorded by Arthur Alexander, whose original cover of the song came out just months before Elvis’s version.  (Do yourself a favour and listen to Alexander’s version on YouTube; it’s an interesting blend of country and Motown.)  Elvis’s version, which was propelled to fame by his 1972 Hawaii special, is a kinetic song with a cool guitar riff played by Linde and a manic drum beat that actually strengthen Elvis’s already strong vocal performance.  For three minutes I’m an Elvis fan and thoroughly enjoying this song.  I’ll even forgive Elvis for that hideous outfit he wore in Hawaii.

One thought on “My Latest Song Addictions”