When news of Playboy founder and publisher Hugh Hefner’s death broke three days ago, I mentioned it in passing to a woman about ten years younger than I.  “I didn’t realize it was still cool to keep a harem,” she quipped sardonically.  She was, of course, referring to the fact that Hefner, right up to his dying day at the age of 91, maintained an entourage of young “girlfriends” seven decades his junior.  Hefner’s plethora of lady friends, a long parade of tall blondes smeared in makeup, high heels, and artificially enhanced breasts, were physically indistinguishable.  Hefner kept his girlfriends at his Playboy Mansion, yet if any of these women saw another man (like maybe somebody closer to their own age), they would be reportedly sent packing.

‘I didn’t realize it was still cool to keep a harem,’ she quipped sardonically.

Hefner began his publishing career writing for U.S. military newspapers during the Second World War.  After supplementing his undergraduate degree in psychology and creative writing with some graduate courses in sociology from the University of Illinois, Hefner became a copywriter for Esquire.  He then borrowed $8000 from 45 investors, including his mother, and started Playboy; the first issue featured nude pictures of Marilyn Monroe taken in 1949.  And Hefner dressed up his publication to match the classy image of himself: nude pictures, including the infamous Centrefold, made up only a small fraction of the magazine.  Most of the magazine matched the literary prowess of The New Yorker or The Atlantic, with a who’s who of literary figures.  Over the years, writers such as Margaret Atwood, Kurt Vonnegut, Arthur C. Clarke, Vladimir Nabokov, Saul Bellow, and others published their short stories in Playboy.  People actually read Playboy for its interviews; in fact, its January 1981 issue, which featured an interview with John Lennon and Yoko Ono, was on the newsstands the night Lennon was killed.

Hefner liked to place himself in the middle of the social changes of the 1960s, often claiming that it was he who helped spark the changes.  Historian Alex Haley interviewed both Malcolm X and Martin Luther King for the magazine, cementing Hefner’s defense of racial equality.

People actually read Playboy for its interviews; in fact, its January 1981 issue, which featured an interview with John Lennon and Yoko Ono, was on the newsstands the night Lennon was killed.

Despite his own claims of sparking the Sexual Revolution, it was the Sexual Revolution, in combination with women’s liberation and technological changes, that saw the downfall of Playboy.  The November 1972 issue sold over 7.1 million copies; one quarter of college men supposedly had a subscription.  Yet in 2016, the circulation was under 700, 000.

I was born after the Sexual Revolution.  By the time I appeared on the scene in the 1970s, Second Wave feminism was at its peak.  So Playboy to me was something old, something some old sexist man would gawk at in a barbershop.  (I actually went to a barbershop about eight years ago and saw a Playboy on the barber’s desk.  I felt out of place, not that it stopped me from taking a peak.) 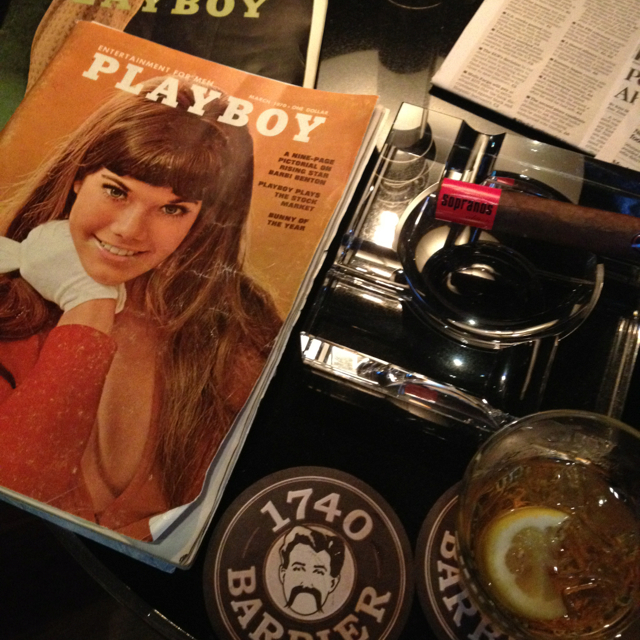 So if you peel away Hefner’s classy image, if you peel away his social activism, he was a pornographer who objectified women.  Gloria Steinem, in her 1963 essay “A Bunny’s Tale” for Show, wrote about going undercover at a serving job at the New York Playboy Club.  Steinem noted that during the audition, women with unattractive legs weren’t invited to stay.

And Steinem noted that the costume, a tight corset with a bunny tail attached, “…push[ed] all available flesh up to the bosom.  I was sure it would be perilous to bend over.”  Additionally, dry cleaning bags, gym socks, and silk scarves were used for padding.  The Bunnies, if they weren’t already fit, certainly became fit by bringing drinks up and down the steep stairs for their minimum wage pay.  The club, which lasted until the ’80s, gave ordinary men the chance to fraternize with extremely attractive women.  As Steinem noted, the customers were often lewd and abusive.

And of course there was the famous 1970 debate on the Dick Cavett Show between Hefner and feminist activist Susan Brownmiller, who accused Hefner of not seeing women as fully human.  Brownmiller quipped, “The day you’re willing to come out here with a cottontail attached to your rear end?” It’s a shame that Hefner could never quite admit that sexual objectification has historically been one sided.

As I reflect on the changes since Playboy‘s heyday, I realize that there has been a lot of positive developments, thanks in part to Hefner but also to the efforts of feminists.  More and more women are less likely to allow themselves to be undervalued, unequal to men, or treated as sex objects.  More and more men are more sensitive to sexual objectification of women.  But that’s not to say that we’re in an ideal world.  The gender gap has lessened considerably but hasn’t disappeared.  And sexual violence, which counts women and children as its most bountiful victims, still exits.  But Hefner, and the controversy that surrounded him, deserve credit for helping to bring these issues to the forefront.

As for the younger woman who made that initial sardonic quip to me?  Well known on Toronto’s burlesque scene, she was able to make that joke to me in part because the age gap has made her more insightful than I, but I also suspect that a large part of it is because she has dedicated her living to displaying her body with female empowerment and a female gaze looking back.