Living in midtown Toronto, I had become reliant on public transit to get around the city. The Toronto Transit Commission (TTC), I assumed, had a good service in the city core, so over eight years ago, I enrolled in its discount plan (if you get a year’s worth of monthly passes, you get the equivalent of one month free).  And I got used to the fact that the pass was mailed to me, my bank account was automatically debited, and I could get on and off any bus, streetcar, or subway without having to worry about paying again.  If I wasn’t working, it was a great way to explore the city.

But I became really unenthusiastic about taking public transit.  Every year the cost of the transit went up and up. (When I first got the monthly pass, it was an even $100; eight years later it is over $142.)  There were heavy cuts to service.  And I got tired that even though I live less than a five-minute drive from a subway station, that drive would turn into over fifteen minutes if you include waiting time.  Plus, where I live will have at least five years worth of delays as the Eglinton Crosstown LRT is constructed. 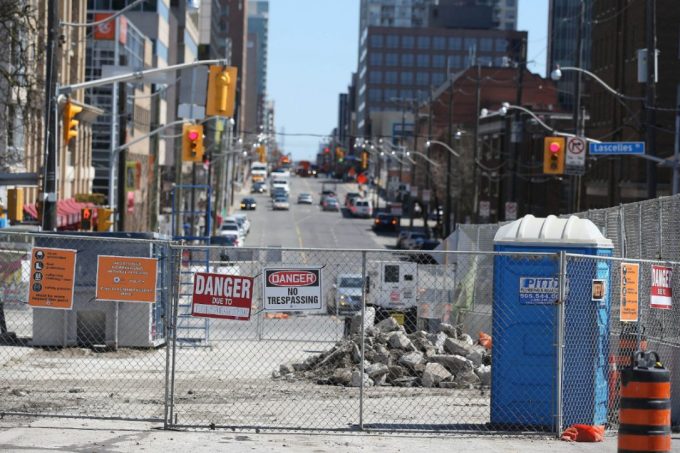 I made a decision: when my yearly TTC subscription was up for renewal, I would cancel and switch to my bike.  So two months ago, the beginning of March, I traded in the bus for my blue bike.

It wouldn’t be that bad, as work is only a twenty-five-minute bike ride, and most things I do are conveniently located in central Toronto.  And although there have been some frosty days during these last eight weeks, I have thoroughly enjoyed biking.   I relish the solitude.  I relish the flexibility of planning my own route.  I relish the ability to travel at my own pace.  I relish the fresh air.  And most of all, I relish the good shape that biking keeps me in.

However, it hasn’t all been easy.  As I’m going along, I’m finding that there are challenges to being an almost year-long biker.  So if you’re contemplating making the switch to biking, here are my tips to making a successful transition.

I hate to admit this, but there have been a handful of times in the last eight weeks that I’ve used the TTC.  The days that I’ve used transit were typically bad-weather days.  There was one day in early March when it snowed and this April has been a considerably rainy month, even by April standards.  If you’re going to bike around, get a PRESTO card. Although PRESTO has its faults–I dislike the fact that I have to tap the card at a subway station if I add money to my PRESTO card online–it’s a more viable option than carrying cash around in case you do decide to take transit.  If you’re biking all the time, you don’t have to keep a large amount on your card (twenty bucks is ample, as it gives you 6 TTC trips).

When I bought my bike helmet, I did it assuming that I would be able to wear a winter hat underneath it.  Wrong!  There were a few cold days in March that I had to choose safety over comfort because my winter hat was too thick to fit under my helmet.  A bike courier I know advised me that next winter I should get a ski helmet, as it’s wide enough to wear a hat underneath.

I also didn’t take eye protection into consideration.  I have bike sunglasses that do a really good job of  keeping the sun out of my eyes; however, it doesn’t fair so well protecting my eyes from rain and snow.  The same bike courier who told me about the ski helmet told me to wear ski googles.  And on really blistery days, a ski mask AND googles will protect your whole face.

On rather cold days your hands will get cold.  There are bike gloves specifically designed for winter, but I prefer wearing ski gloves.  Yes, it’s a little tough wrapping your hands around the bars, but your hands will be incredibly warm.

One thing I haven’t solved is how to keep your feet warm.  I didn’t try wearing winter boots, because I thought they would be cumbersome while peddling.  If anybody has any ideas, let me know.

My bike is covered for a once-a-year tune up from the shop where I bought my bike.  I take advantage of it, but sometime this spring I plan on learning some basic skills to take care of my bike, as I’m bound to have something go wrong while I’m putting so many kilometres on my bike.  As embarrassing as it is to admit, I have no idea how to patch a tire or fix loose bike chains.  There are some shops in Toronto that’ll teach you how those basic skills.  I’m thinking specifically of Bike Pirates on Queen Street West in Parkdale.

Learn the Rules of the Road

Riding on the streets, especially main arteries during rush hour, can be a very daunting and scary experience.  It is amazing how many motorists neither watch for cyclists nor care to watch for them.  As a general rule, it’s a good idea to keep to side streets and parks and use the main arteries only when necessary.  (Yes, main arteries belong to bikes too, but cars and bad drivers aren’t going anywhere, and if a car hits you, you’ll get hurt, not the driver.)  I’ve discovered that there are certain situations when drivers are more likely to ignore bicyclists, including when drivers are making right-hand turns (drivers pull really close to the curb).  Other situations that are dangerous are cars waiting at red lights (again, drivers will get really close to the curb) and, of course, people opening doors of parked vehicles.  If you feel you’re a little shaky on the rules of the road or if you’re not sure of your rights and responsibilities as a bicyclist, consider taking one of the bicycling courses the City of Toronto offers.  They gear to bicyclists of all levels and teach the rules of the road.

Remember that safety isn’t the responsibility of only drivers.  I’ve seen a lot of bicyclists do really stupid things, from not having lights on their bikes during nighttime to veering into traffic.  I once saw a woman swerving her bike between cars on Bathurst Street near College Street.  And she had an infant sitting behind her on a baby seat!

I find it amazing how many bicyclists don’t take their own safety importantly.  I started wearing a helmet only last year, so I’m not going to preach about the merits of wearing a helmet, although it can prevent serious head injuries.  However, why do so many bicyclists not have lights on their bikes?  Why do so many wear dark clothing? How come so many don’t have horns or bells?  Only you can be trusted to take your life seriously, so think safety first!

One thought on “Bicycling Around Toronto”