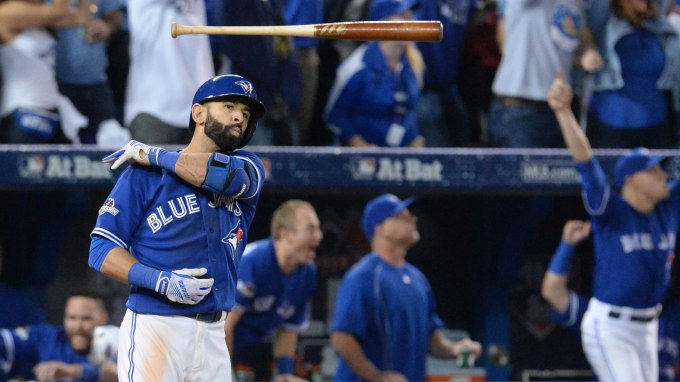 For me, this past October will go down as the year that I got on the band wagon and started caring about the Jays. On the day of the Jays’ Game 5 against the Texas Rangers–you know the game I’m talking about–I worked until 5:30 in the afternoon. After work, I took the subway to the Rogers Centre (should I say Sky Dome?) During games, the Rogers Centre plays the radio feed outside the dome. I walked to Gate 8, where people had gathered. On the other side of the doors, a large tv was broadcasting Fox’s coverage of the game. Twenty people stood outside those doors and watched. When you looked inside, you could see people sitting on the 100 level. It was almost like being inside.

I’m not normally a sports spectator and I don’t play–I’m missing the part of the brain that’s responsible for eye-hand coordination. The thought of watching sports on tv bores me (how is watching golf or NASCAR on tv entertaining?), and I can’t justify spending money on going to a game. But this year I got caught up in Blue Jays play-off fever. It’s not that I thought they were going to win it all, seeing that it was their first year in the play offs in 22 years; last time it took them a few tries to win it all. Plus they played the last few games of the regular season atrociously. Yet when they won the AL East, I got excited.

It wasn’t the Blue Jays success that got me. After all, I’m not playing for the Jays, so the accomplishment wouldn’t be mine. Nor would it have been the City of Toronto’s accomplishment: to my knowledge, not one current Blue Jay is from Toronto. Or from Canada, for that matter.

I got on the band wagon because I became nostalgic. When the Blue Jays won their back-to-back World Series in the early 90s, I was a high school kid who really enjoyed watching baseball. And to top it off, during the same time my uncle asked me to help him coach my brother’s baseball team, despite the fact that I couldn’t play and stuck out like a sore thumb when I tried. But it was good for me (I got in shape and had two great of summers). And I thought it was amazing to be from a city of sports greats–even the Leafs were playing well at the time.

But time got in the way. In 1994, the Expos (remember them?) were going to win it all, but the strike cancelled the season. I hated that MLB added inter-league play (the NL used to be a mysterious league where pitchers went to bat). And the post-season keeps expanding (what’s the point? The regular season is 162 games).

Yet this year I got on the band wagon because my memories of what it felt like to be 16. In 1992, I was in grade eleven in Mississauga, and on the day of the parade, the school virtually shut down. A friend and I stood outside the school as a classmate of ours got in her boyfriend’s car to join the parade downtown. It was an overcast, cold fall day, and we’re shaking outside. I ended up watching the parade on tv with my science teacher. I remember it like it was yesterday.

So here I am, 23 years later, walking up to Gate 8 of the Rogers Centre. It’s an overcast, grey day. I arrive just in time for the wonky seventh inning, when, for twenty minutes, the umpires deliberated the Rangers’ weird run. I talk to the kid next to me and we debate the meaning of John Gibbons’s body language. “No,” I said to the kid. “The run stays.” When Bautista scored his game-winning home run during the bottom of the seventh, everybody cheered, including me. When the teams nearly charged each other, my shoulders sunk in disappointment. Was a good, albeit bizarre game, going to be ruined by ejection and fighting?

I looked around at the twenty people gathered outside. Some of us were older, but most were kids who were probably in diapers in ’92 and ’93. Some of them probably hadn’t even been born. And here they were, cheering, rooting, and experiencing local baseball success for the first time in their lives. Watching them, I got enjoyment watching their enjoyment.

Of course we know that for Blue Jays fans, the story didn’t end well. The Jays won’t be playing in the World Series this year. But for a few kids standing outside Gate 8, they have memories to last a lifetime.