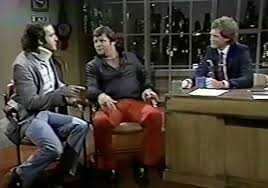 Last Wednesday David Letterman gave his final show. Having hosted two consecutive night shows on NBC and CBS for 33 years, Letterman bested Johnny Carson by three years. Letterman had announced his retirement some months before, and apparently there was a six-week build-up on his show that included big-name celebrities coming by to say their final farewells. I have to use the word “apparently” because I haven’t had cable for almost a year, so I wasn’t watching. Even when I had cable, I hadn’t watched him for fifteen years plus.

For most of the 80s, there were two late-night talk shows: Carson and Letterman. Carson was old school, polished, and in with the celebrities, whereas Letterman threw tvs off roofs, did stupid pet tricks, and was brash and sometimes rude with celebrities. Even in the early 90s, when Carson retired and Letterman jumped networks and became late-night king, he was still contemptuous and full of spunk in the Ed Sullivan Theater.

I was a young kid in the 80s, so I missed most of his NBC show, though I did see the odd episode during the summer. Had I watched Letterman regularly, I would have been in awe of those shows: Andy Kaufman’s staged fight with wrestler Jerry Lawler, Crispin Glover’s kooky behaviour, and the black-and-white photos before and after commercial breaks. During his first year at CBS, when I was watching, I loved it: Surajul and Mujubar’s cheap Statue of Liberty novelty item on Letterman’s Christmas tree, Madonna’s vulgar-enhanced interview, Drew Barrymore’s flashing her breasts on his desk.

But his show lost touch with me, even by the late 90s. Letterman had his heart attack and became mortal. The 9\11 attacks changed and saddened him. And in an age when cheap tv and reality shows are king, there became a proliferation of talk-show hosts interviewing the same guests over and over and doing the kind of gags Letterman invented twenty years ago.

As I write this, I’m thinking of all the shows that have been on tv way too long for their–or anybody’s–good. Some, like The Simpsons, started off good but limped into crap; others, like Survivor and American Idol, were a phenomenon for one season but were stretched into multiple junk seasons; and some, like Dancing with the Stars, were never good to begin with. And for every one good show like Breaking Bad or Boardwalk Empire, there are ten junk shows like Judge Judy and Steve Wilko. Add the proliferation of online video services and pirated tv, who pays for cable?

That’s why I didn’t watch Letterman’s finale: no cable. The CBS online service is blocked in Canada, and I don’t have the patience to find pirated sites. I’m sure somebody’s posted it on YouTube, but at this point, I can’t be bothered. It’s too late.

When Carson’s last shows aired, I watched. I watched Bette Midler, as his last guest, serenade him. And I wasn’t even into Carson. I considered him an old guy my grandparents watched, along with Sinatra and Dean Martin. Letterman was my generation. And I didn’t watch his last show. So in a way, I’m sad. For me, tv is dead.